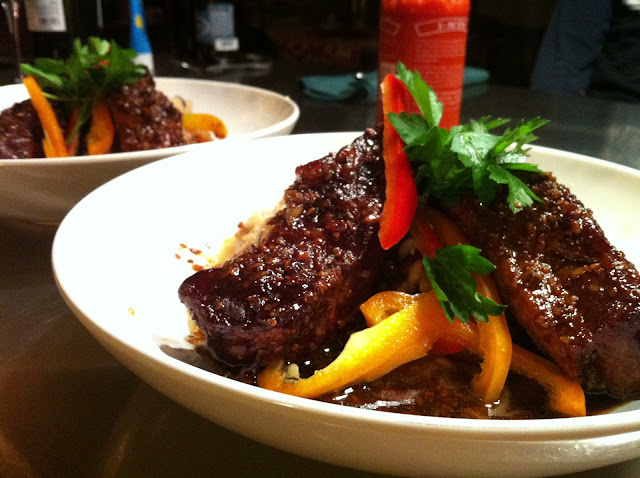 Let me just say at the onset that I love the country rib cut of pork. Sure it’s a little fatty but slow cooked it is always tender and delicious- and since I vowed to only buy ‘happy’ meat it is also one of the more economical cuts I can get from my pig guy at the farmers market.

Bake at 250 covered for 1½ hours, uncovered for one hour. The ribs will get pretty saucy so I flipped them midway through the uncovered baking period to brown them evenly and help caramelize the glaze.

Put chicken broth in medium-sized pot and bring to simmer adding ginger, cayenne powder, and soy sauce. At this point I put the dried mushrooms in the broth and allowed them to plump up (10-15 minutes?). When mushrooms are plump and soft remove from broth and chop- removing any tough stems-set aside. Keep both on heat.

Heat a large pot over medium heat sauté chopped onions in olive oil about three minutes, add mushrooms and kale and sauté a few minutes more until kale and mushrooms have given off some moisture. Add rice and cook until rice is coated with oil and just a bit translucent around the edges. Add sake and cook, stirring almost constantly, until liquid is absorbed. Then add hot broth- about ¾ cup at a time- stir and allow the liquid to be absorbed before adding the next batch. The risotto should be slightly firm and creamy, not mushy. I like my peppers crisp so I added half to the risotto along with the last bit of liquid and then garnished with the rest.

Remove from heat and allow to rest, covered, while you pull the pork out of the oven

By this time the pork should be tender and swimming in a richly favored broth. There is usually a pretty thick layer of oil/fat on the top of the broth. Skim as much of that off as you can and then serve with the risotto, drizzling a few tablespoons of the broth over the pork once plated. 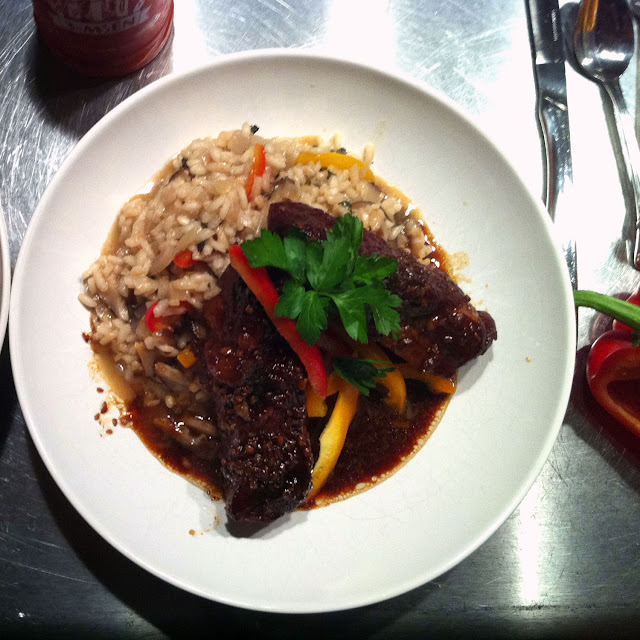 I garnished with parsley because that’s what I had on hand but cilantro would probably be better.